About Jerk of All Trades

In the Spring and Summer of 2011, two issues of Jerk Of All Trades made it out from the cranium of Maggie St.Thomas to the streets as a print-only publication specializing in Music and the Arts, Cannabis, Photography, and a RIP section paying respects to legendary artists, including Joey Ramone, Timothy Leary, and Bradley Nowell. 10,000 copies of each issue were distributed all around key high-traffic outlets in Southern California and free to readers. With a collection of incredible contributors, many great articles and features were published.

Rising from the ashes…

On March 31, 2019,  In the summer of 2012,  Jerk Of All Trades Magazine met up with LA rapper and community activist Nipsey Hussle. We chatted about doing a future article and feature on his music in what was to be our 3rd print issue of the magazine. Nipsey Hussle was friendly and polite and posed for a couple of photographs with his magazine copy. Nearly a decade had passed, and the idea of putting another issue of Jerk Of All Trades seemed to be a long-lost dream. One of the artists photographed for the 3rd print issue was Nipsey Hussle, who was murdered on March 31, 2019, and helped remind us that even though we may stumble or stall, or stop, we can always press on when we are ready. Believe in yourself, and that saying is sometimes hard to follow, but you must always believe in yourself no matter what life throws at you. Life is short, do what feeds your soul, and so Jerk Of All Trades was reborn in March 2019.

Staying true to how the first two issues were developed, Jerk of All Trades focuses on Music, Entertainment, Photography, Art, and paying respects to the deceased with a RIP section, and more. Jerk Of All Trades is available to readers worldwide at the click of a button.

Although Jerk Of All Trades never made it back to print and remains a semi-regular “online only” magazine, I would like to thank the contributors and readers, and everyone who has helped make this platform a reality. Life throws us curves and teaches us it’s important never to get too comfortable. Stay positive and always count your blessings, and keep moving forward.

During the pandemic, the concert venues were closed, so much of what was covered in Jerk Of All Trades was not happening because nothing was happening. There were live streams and a few drive-in shows; LP was incredible, but it just wasn’t anywhere near what live concerts once were. Other than that, I conducted phone interviews with a couple of artists  I have photographed on many occasions.  I also attended a  few of the Black Lives Matter rallies. I gathered content from a handful of contributors who were documenting the protesting events and the people and what was going on in their cities. Other than that, I was pretty much at a standstill, putting this magazine on the back burner once again. Instead, I put the gears into motion to publish my first book and start a new carer in Death Care. As a Crematory Operator, I assist those who once had a beating heart into the afterlife. In October 2022, Still Life: The Photographs of Maggie St.Thomas became a published reality.  Encompassing four decades of original photographic work compiled into 104 pages of a hardback book. October 29, inside the Chapel of Shoreline Funeral Home & Crematory in Long Beach, CA., I held my first-ever book signing and release party, with live music and performances by The Bourbon Saints and Eva O., both of which were some of the very first music artists I had ever held a camera up to.Still Life: The Photographs of Maggie St.Thomas  is available through Barnes & Noble. On January 21, 2023, from 6-8 pm, I will be doing an in-store book signing at Barnes & Noble Bookstore located at the Bella Terra in Huntington Beach, CA. 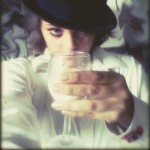 Maggie St.Thomas is a Michigan-born photographer living in Long Beach, California. Since 1994, her photographic and journalistic works have graced the pages and covers of over 300 print publications including Rolling Stone and High Times Magazine, dozens of album covers, and more. With an incredibly versatile portfolio that includes one-on-one portraiture sittings with legendary artists including Etta James and Lemmy Kilmister, to name a few. After years of study at Cal State University Fullerton's Forensic Programs, and being licensed as a Crematory Operator with CANA (Cremation Association of North America), Maggie has established a career in Death Care as a Crematory Operator, helping those who once had a beating heart on their way to the afterlife. In October 2022, Maggie became a published author with her book Still Life: The Photographs of Maggie St.Thomas, four decades of photo work in 104 pages. Available now at Barnes & Noble.

Type to search or hit ESC to close
See all results